One of the most exciting and anticipated segments of our production process is the call and review of our stage design proposals. Our Production leads, alongside the Art and Curation branch, review these proposals and select the top designs for each stage based on overall professional production quality, thoroughness of the proposal, ability to meet the pre-defined budget, and the design that is most fitting with the theme of the year. A thorough proposal should always include descriptions, drawings, pictures, and 3d models, as well as details regarding engineering, power, and crew. Lucidity Production Manager, Eliot Winder, advises to pay particularly close attention to the structural and engineering components of the design, along with how feasible those elements are to build. Lack of structural integration with the facade is the first element that, if missing, will often cause him to remove the design from consideration.

James Spektrum, a Production Lead and Music/Talent Branch Manager, who also reviews and approves the submissions, informs designers to “read the ‘Call for Stage Design Submissions’ letter thoroughly and take the Story Arc into consideration…with explanations about how and why your [design] choices are influenced by the Story Arc.” In addition, James pays close attention to included photos of the designer’s previous work, preferred materials, aesthetic choices and overall ability to deliver unique structures and stages. His favorite part of the submission process of getting to collaborate with the artists to tie the production together with sound, light, and stage.

His favorite part of the proposal process is witnessing people’s interpretation of the theme when designing the stages. Eliot encourages aspiring designers to reach out to him and the Curation Director (Luke Holden). “We are always open to providing feedback while you [the designer] are preparing your proposal. It’s not a competition,” Eliot continues, “and we love supporting you through your creative process. Follow the advice we give you in the bid proposal instructions, provide something that is going to surprise and excite people because it’s unique and tie your design to the theme; you will have a sure fire way to impress us with your design.”

Ryan RayRay Dixon adds, “First off, I like to see a clean formatted proposal. I pay most attention to a well explained and illustrated design including measurements, materials, and different angles (plan view, isometric view, dimensional view, etc) I also pay attention the deeper meaning or what inspired the design and why it is relevant for the particular stage (be it Lucid, Alive, Nomads) the designer is proposing for.”

Here is a bit of insight on our chosen stage designers for this year: 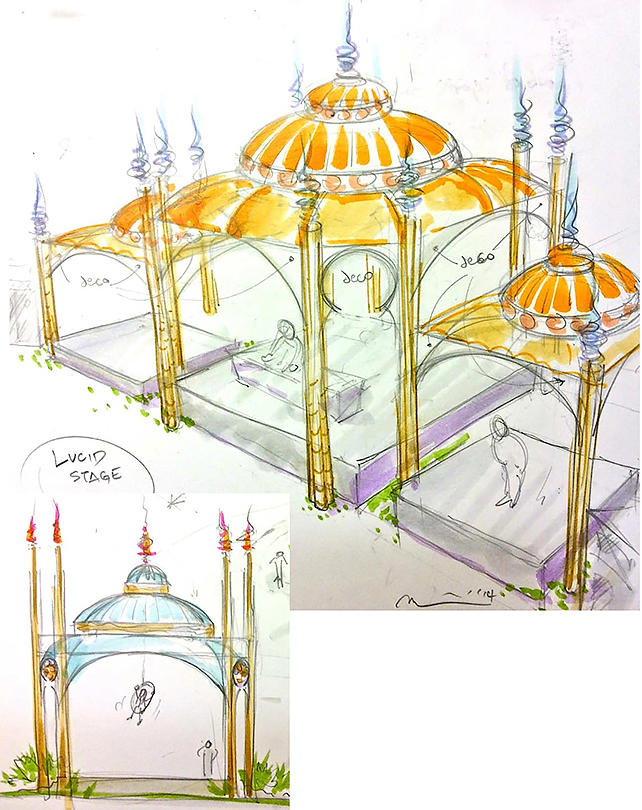 The Lucid Stage is one of, if not, the most prominent structures at Lucidity Festival. After Gerard Minakawa and Alaska Piper (of design collective Coyote Prism) collaborated last year on the Lucid Stage design, they knew they would work together again.

Gerard was primarily inspired by Hagia Sophia, the 1000 year old temple in Istanbul that has transitioned from a Greek Orthodox church to an Islamic mosque, and is currently a museum. He cites the “multicultural appeal, and the adaptation of architecture to human needs” as the reason for his focus on the temple. Coyote Prism chose to draw inspiration by blending Art Deco design with imagery throughout a variety of faiths and civilizations, including Sumerian and Egyptian symbols that have recurred throughout history. “I summoned more inspiration from the Art Deco design era,” Alaska notes, “I find this time period particularly fascinating because it harbored a resurgence of interest in world culture, architectural innovation, and ancient symbolism, which fused with modern standards of industry.”

When asked about his advice for aspiring designers, Gerard recommends being a great listener in order to successfully be a strong designer. He advises that design requires consideration on how the sound, light, video, performers, and overall production crews will interact and co-create in the design space. Alaska also stated the importance of working collaboratively, being open to change, and that “fighting other ideas is counter-productive” when it comes to working as a stage designer.

Surely you remember the Audiowaska stage from the past two years of Lucidity Festivals. This year the production company is taking their stage design to a new level building the Alive Stage! During the development process the lead designer, Michelangelo, will search through images seeking out color tones, textures, and any types of elements he feels will translate into an intricate stage design while also complimenting Randell’s lighting design. Often they choose to sketch out the design and eventually have another crew member, Chase, work up a CAD rendering. Sometimes they ask their graphic designer, Taija, to add to the concept. When selecting design materials, they prefer to reduce their environmental impact and to be as sustainable as is feasible within their constraints. This year they are using reclaimed tree branches which they intend on bringing to life with LED lighting.

Next up on their agenda: the team will be building the main stage of Forever Everland, as well as Enchanted Forest. They are living examples of their advice to other designers: remain true to your inner self, work at your skills every chance you get, push yourself  to learn related disciplines and don’t compromise your beliefs for a job. 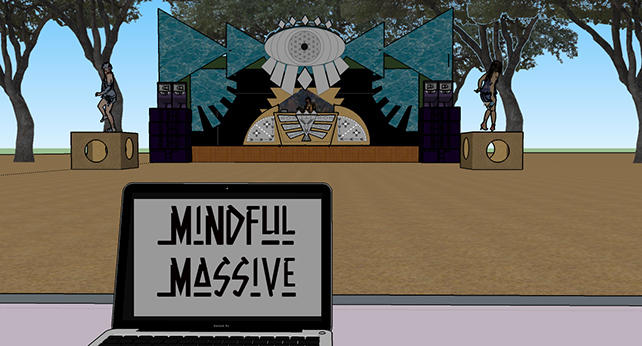 With their selected stage design, Mindful Massive wished to pay homage to the theme of Kindred Quest and to the indigenous Native American culture by incorporating symbolic imagery with LEDs, lasers, and psychedelic projections to “provide a stimulating contrast of modern technology and tribal roots” as the designers feel that these [Native American] principles are timeless sacred truths to reflect on…” They also garnered inspiration from ancient temples to Frank Lloyd Wright, their surroundings in Lake Tahoe, and the community of artists around them.

Mindful Massive begins their workflow by discussing and understanding the intentions they aim to portray. They follow up with sketches on paper and use software to refine details in the final design image. Through four years of collaboration, starting in Tahoe, they began to reach out to concert venues, bars and festivals to create multi-sensory environments. Their advice for other stage designers?

2 thoughts on “How to Design Great Festival Stages: Tips from the Pros”