I’m Dave Zaboski and the Director of this short film.

This story begins one cold October night in late 2014 when I received a call from two young creators about the idea to take the six year arc of the Lucidity Festivals and turn it into a three minute piece of animation. They wanted it done by March of 2015. Roughly five months to do three minutes of animation? As an experienced animator, that seemed a tall order.

“Do you have a story written down?” I asked. “Well, we were thinking we might power down some coffee tonight and write it all down.” said Jonah Haas, enthusiastically. He was one of the organizers for the Lucidity Festival and its head of Marketing.

“So it’s not written down.” I pinched that spot right between my eyes.

“No, not really,” said Luke Holden. He’s the other organizer and an amazing creative. We know him by the name St. Luke as he wanders the festival causing miracles everywhere he goes.

“But we have been thinking about this for a long time. It’s in our heads.” He assured me.

“It’s in your head.” I said, trying to sound normal. “Okay. Well, um, why don’t you write it down and shoot it to me when you’re done.”

“Yeah, sure,” said Jonah, “We’ll send you something tomorrow.”

The next evening I received an email with a pdf attached and let out a woesome sigh. “Oh, boy.” I thought, “Here we go.” I knew that the moment I opened the pdf I would have to begin the wearisome journey down that long, long road of wordsmithing and editing and rewriting and finely crafting whatever it is they sent me into a story form that we could turn into something. This can sometimes be a process that lasts months. I dreaded opening the pdf but I had promised to look at it. So I did. I had no idea how pompous and cynical I had become.

My shock and wonder grew with each perfect sentence. At the end of each of the six perfect paragraphs eloquently describing the arc of the living personification of the Divine Feminine, Luci, I blinked furiously and shook my head.

It was beautiful. I had no changes. I was stunned.

I immediately called Luke and I was in. These guys were something special. I wanted to be a part of it.

What follows are some of the elements that have gone into this iteration of our gentle touch to her cheek. This is what thought and process has been infused into our invitation to have her awaken and you join us in this collective journey toward Lucidity.

From Page to Screen

Once we had a story we could begin to visualize how it would wend its way to the screen. I actually had Jonah read what he wrote and I recorded him. I took that recording with me on my hike in the hills every morning for a month. I listened to that recording a couple hundred times. What came to me was imagery that no longer needed the words. When you can show a beautiful sunset, you don’t need to tell people it’s a beautiful sunset. So as the visuals developed, they pushed away the need for a narrative. Jonah’s story was a perfect inspiration, but the voice over had to be a companion to the imagery. Not a description of it. 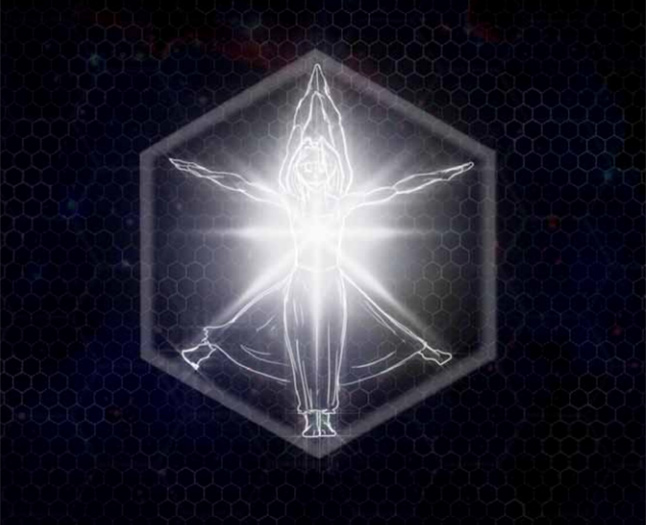 This was an opportunity for Luci to speak for herself. If she were to tell this story, the Lucidity story in her own words, what would she say? How would the spirit of the Divine Feminine describe her emergence? How would you describe that emergence in yourself?

The spoken word poem is the result of us listening to Luci. To hear how she would put it. Woven into her thoughts are associations directly from Jonah’s story, color coded to the right to show where Luci’s dialogue relates to Jonah’s story. Luci also references T.S. Elliot’s Four Quartets, a poem from Emerson and other esoteric nods hidden throughout. 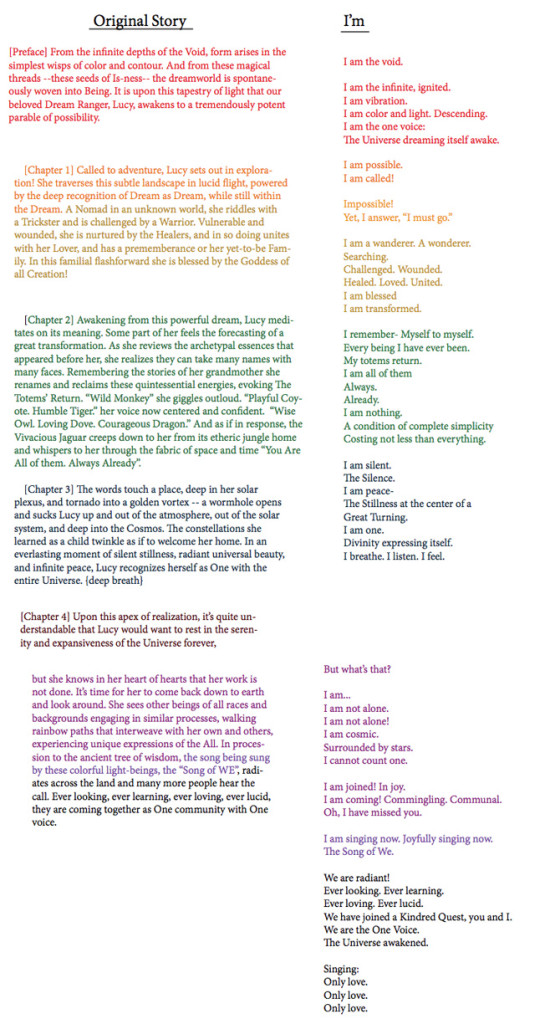 Below is the spoken word poem along with my direction on how the music should flow. I made this before I knew that Birds of Paradise were going to do the music. Once we had them, I didn’t need to do much more directing. With Torin Goodnight and Tyler Gibson our music was in very good hands. 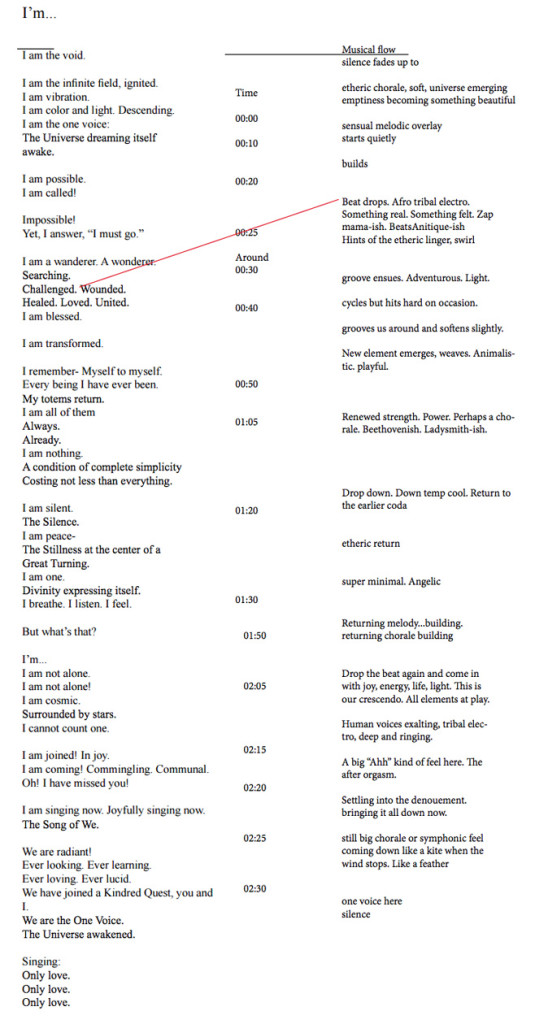 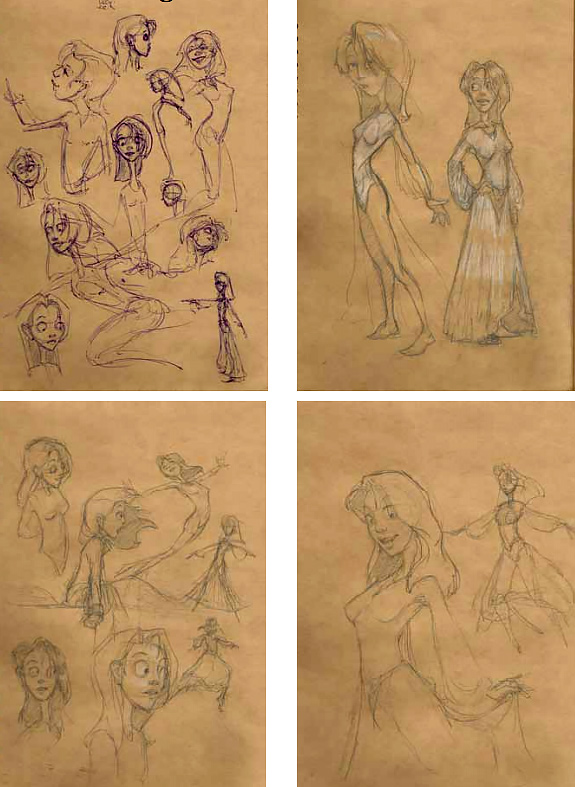 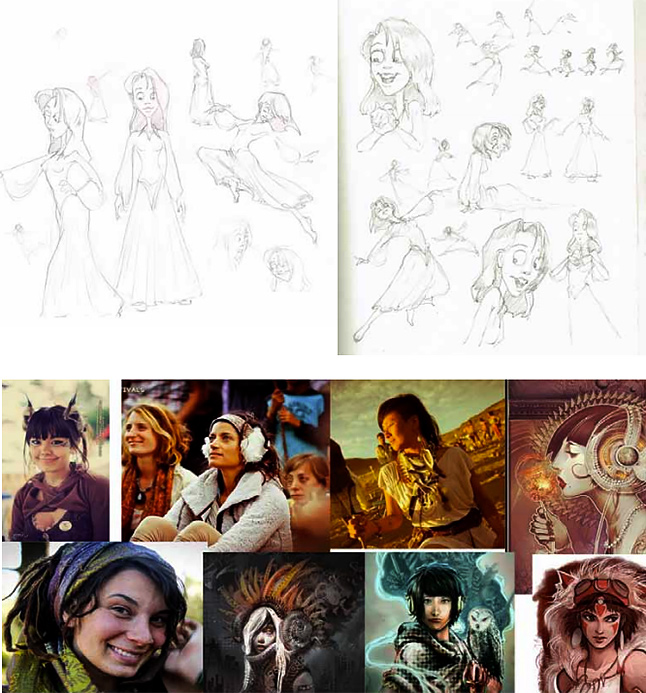 These were initial explorations into what Luci looked like. Maya put together a page of inspiration. Ultimately, the design is simplified and kind of animé inspired, but not totally complete. We had very little time for pre-production and character design. We needed a design that we could also complete in a short period of time. I feel like I got to know her more and more while drawing the animation. The more I drew her, the more I could feel her coming to life. It’s the best part of being an animator! On the next iteration we’ll have a better idea of exactly what she looks like. 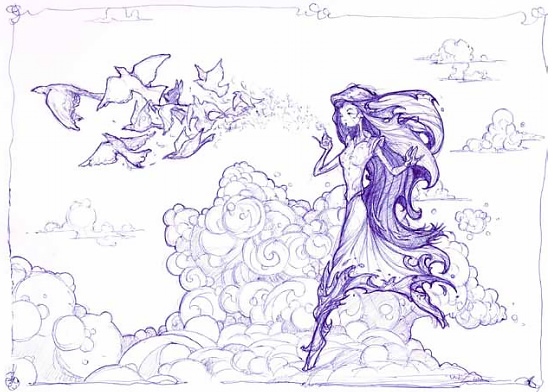 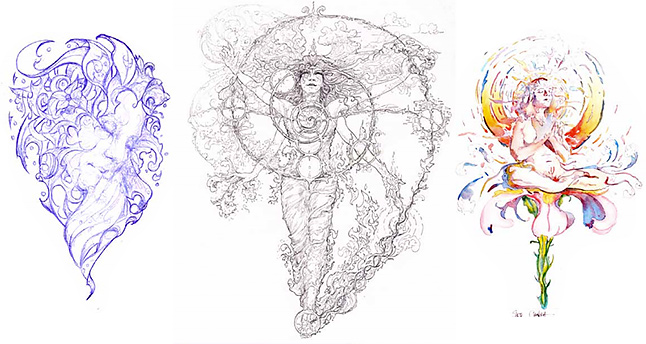 We create most powerfully when we create from feeling. Creating a consensus on feeling is very powerful for a team and keeping that feeling in place requires a certain structure. Often displays are a perfect structure to keep a feeling around. At the beginning of the project I was putting together what we wanted Luci to feel like. These are some drawings to start to determine the feeling of the piece.

When starting a project it’s important to take inventory of your assets. Assets are things that will in some way be useful to what you are creating. We were blessed on this project with some incredible assets—we would use as our backgrounds the posters from previous Lucidity Festivals. So we took the raw images from Mark Goerner, Michael Divine, Justin Buus and myself and sliced and diced them to create layers that allowed us to build a world around Luci. By slightly moving one layer offset from another in an effect called parallaxing, we could give the impression that each plane existed in a different space. This created the illusion of a depth we could move Luci through. 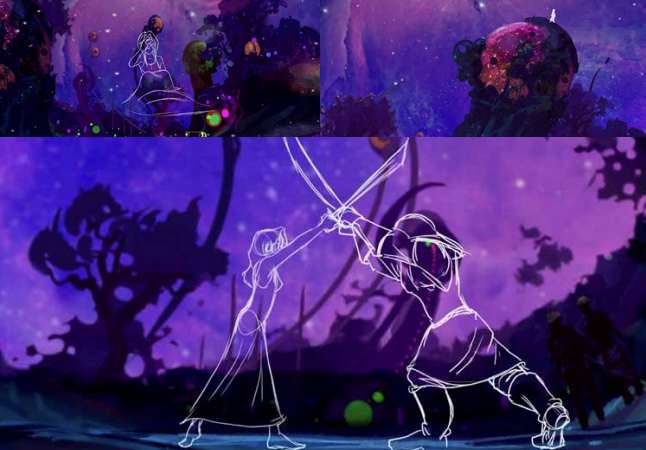 In order to bring Michael’s amazing painting to life, I had to paint out certain elements so I could animate them. Notice that I removed the beams and his characters and the brought Luci in to dance around Michael’s imagination. Then Forest sliced this one up so we could use it for multiple scenes. 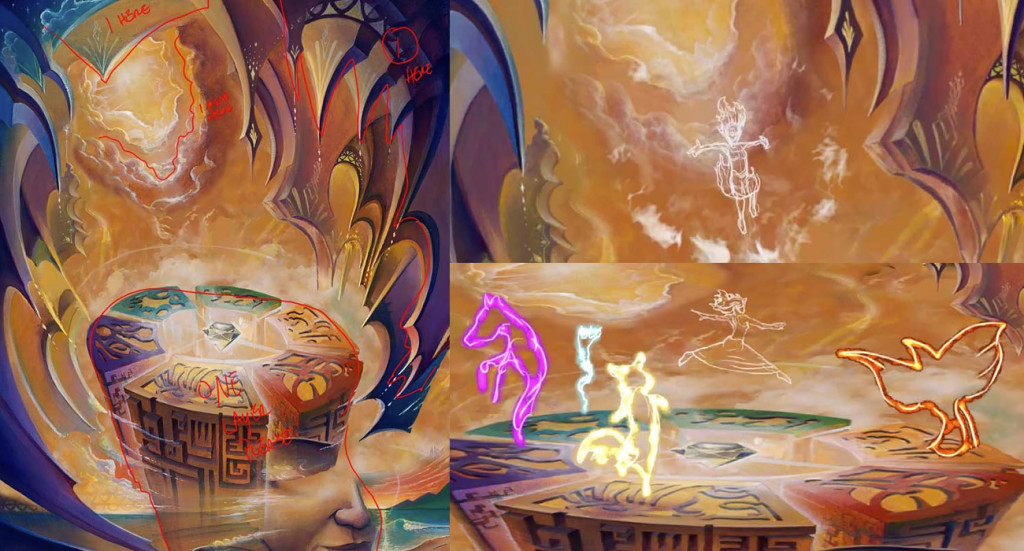 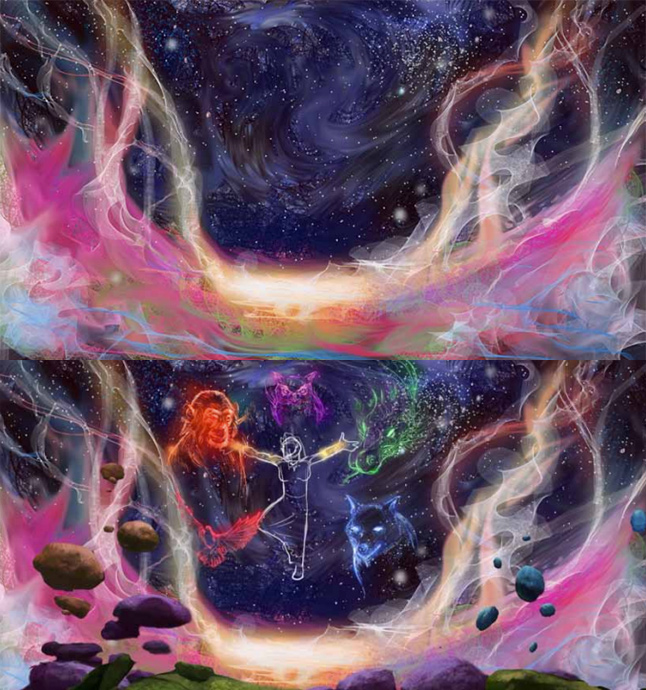 Here I painted the background digitally as a simple stage for Luci. But then I tapped Justin Buus to make the animal heads representing the Totem’s Return. He did a beautiful job. I love collaborating with amazing artists! 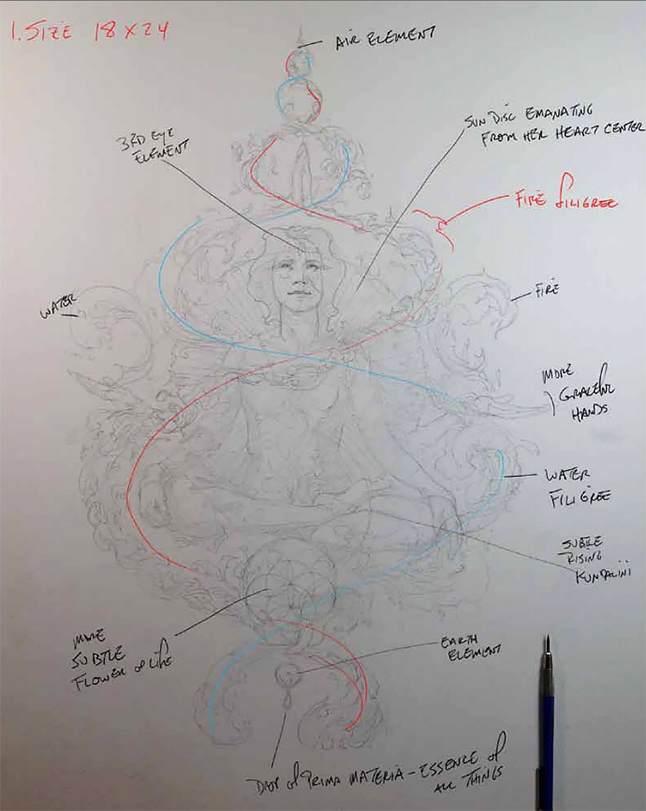 Notes for the drawing I was proposing for Lucidity 2014. Parts of this image were inspired by the T.S. Elliot poem, “the Four Quartets”.

Often when giving direction it was helpful for me to diagram a shot or describe the feeling I was going for. Sometimes I would make a little painting or rough sketch to help Maya, Brian or Forest understand was I was getting at. Below I made a quick painting to describe the kind of atmosphere I was looking for in one of our live action shots and below it is the shot found by our amazing editor and After Effects artist Brian Kubat. 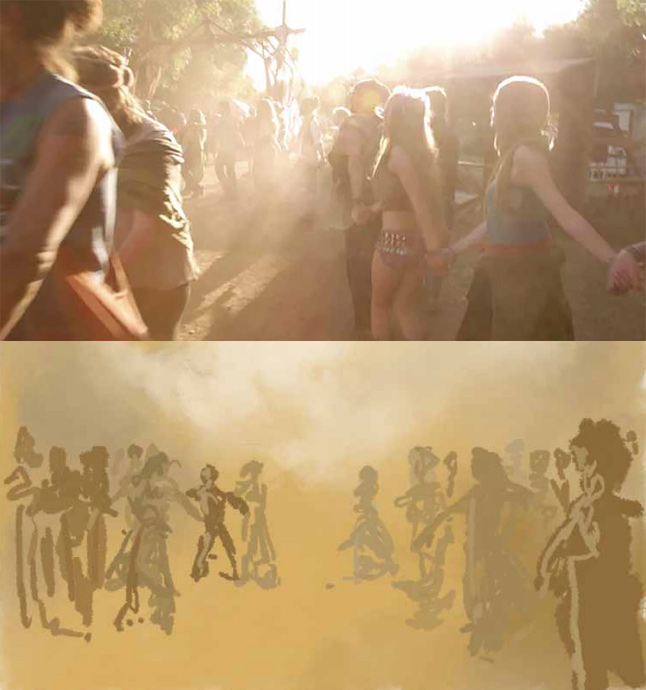 Here are two diagrams for the last shot. It was important to get this shot right and our producer Maya Zuckerman did double duty also as an After Effects Artist to make this camera move. It was hard work to take Mark Goerner’s spectacular tree from a vertical composition to a horizontal one. We wanted the audience to feel as if they were standing before this scene and on their way to this magical meeting place of kindred souls. Maya did a beautiful job in both her roles! 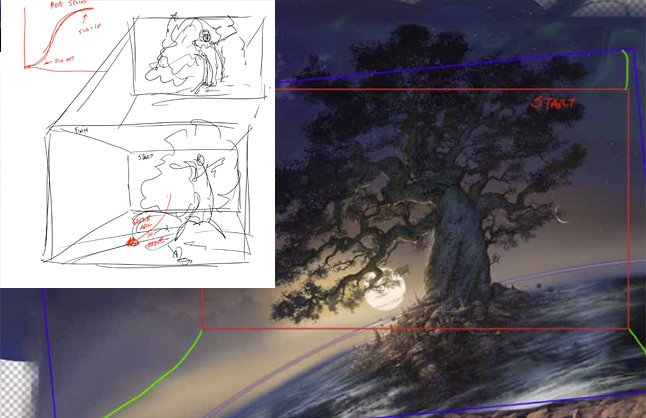 In order to keep Mark’s amazing painting “alive” for the credits, Forest Rain, our intrepid After Effects Artist and youngest member of our team, animated some activity in the city below the tree. Keep your eye open for a flock of birds, some space ships traveling and even a floating pyramid. Really lovely work making a still image feel so full!

It was such a blessing to work on this amazing project. Because of it, we know that the Divine Feminine is no longer emergent. She’s here. We’ve discovered each other in our kindred quest and now we’re ready to embark on our first steps together at the Crossroads.

One thought on “The Making of ‘Luci’”