Every ring has a story and just as Pitango was chosen to create these magical rings, the rings choose their owners as well.

Some say their lives have been completely altered after their union with one of these mystical designs. Others say they’ve become nearly obsessed and keep wanting more and more. Some cannot handle their destiny and discard their rings; keep them locked and hidden away or bury them in the sand. The only way to truly feel the power is to try them on yourself. 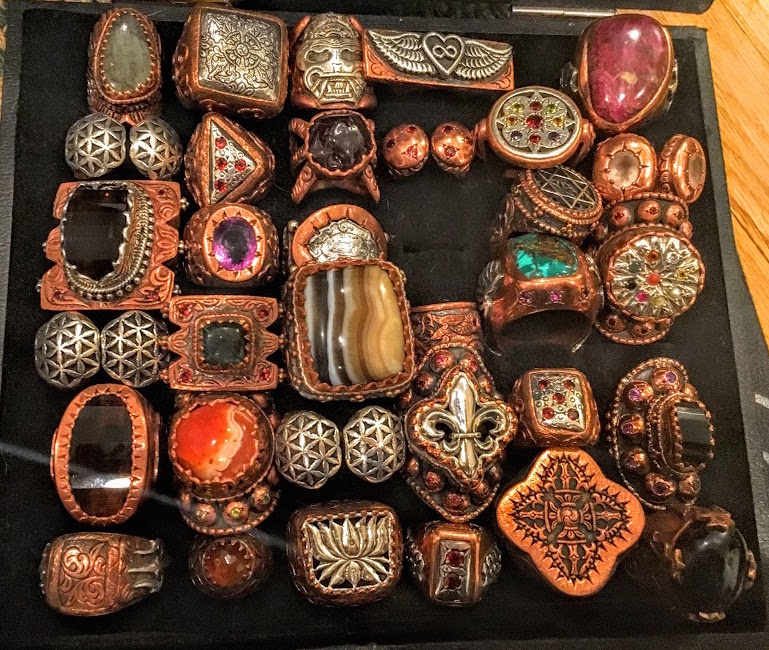 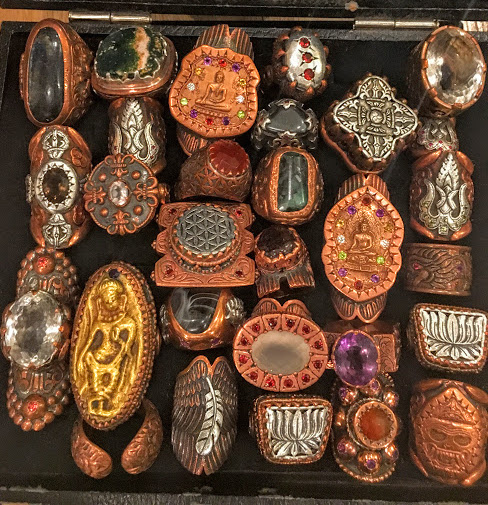 Behind the magic of the rings, their creator holds a beautiful and mysterious energy, like a shaman or dreamweaver of some ancient past. I sat down with him on a clear moonlit Venice evening to dig a little deeper.

I opened the door and was greeted by Pitango and a gang of goddesses who offered me pizza, tea and performed a welcome dance. One of the women has each hand full of his rings from her own collection. Another one is going through each box, trying to decide.

“He’s kind of this crazy guy. I call the rest of us the “normies,” says Ashley, one of the goddesses. She also acts as his “bullshit reader meter” to make sure he is telling the truth or some version of it. As the night wanes on we are joined by a number of visitors, all basking in the magic of his rings.

For 25 years, the self-proclaimed “DJ of rings” has been directing a team of craftsmen in Nepal to create one of a kind masterpieces out of copper, silver and beautiful stones. He directs each craftsman to create rings for specific people.

After leaving the Israeli army at 21, Pitango, “fully damaged in his soul,” was wandering around the Anjuna market in India. He was healed by a stranger. “It was the first time anyone truly looked in my eyes. For 10 minutes he took my hands and looked in my eyes and I saw so much love. It was amazing. Through his eyes, I dared to be me for the first time,” he says.

Then, he heard a voice. And this voice said, “You can be truly anything you want. When a person really does what he wants to do, this is the opportunity. It’s not a risk. This is where you find your power.” It was a really precious moment in my life,” says Pitango. When he opened his eyes from this “lucid dream,” there was a Tibetan woman selling turquoise.

“I never saw turquoise in my life. Even if I looked at turquoise, I would not see it. I would pass it like it was nothing,” says Pitango. He bought every piece of turquoise on that table and that is how he started.

After that, he returned to New York completely obsessed with stones. He started making jewelry for particular members of his family and sleeping with them all over his body.

When I ask if he physically crafts each one himself, he says, “No fucking way, yo. I got a life.” (Laughs)

Considering that he has over 700 rings with him, it would be pretty insane to make each one himself. He does however assign ring concepts to specific designers. “I know the energy of each person and tell them which ones to make. I feel like what I do is not really designing because I don’t do any action. Things are just coming to me and I bring them out to the world. It sounds really spiritual but it’s not. My job is to make sure that the right ring will go to the right person,” he says. 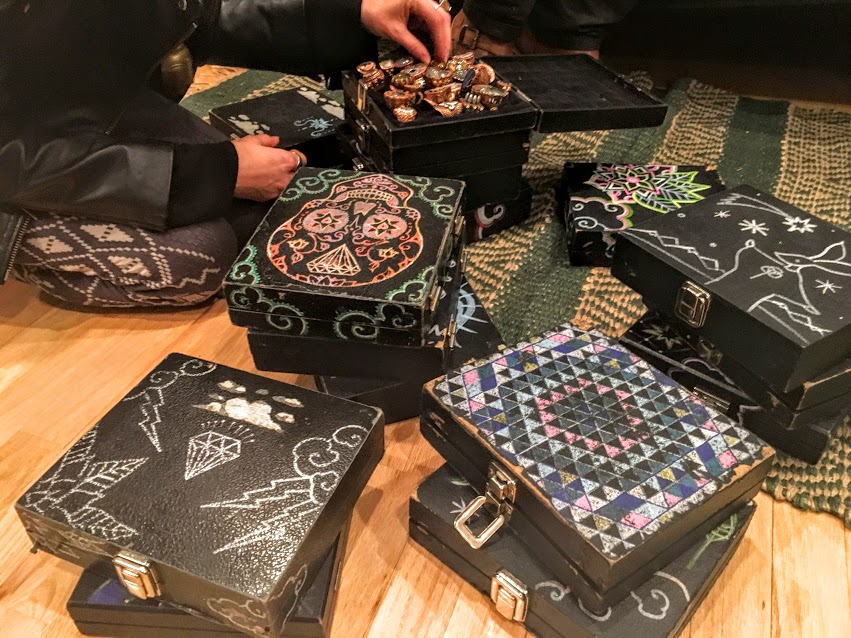 The un-ending boxes of rings

The people that physically make the rings reside in Nepal. Pitango, having found them through the same magic that inspired him in the first place. After making rings for 5 years in NY, he went on another travelling journey to spark more creativity. In Brazil, he spotted a ring on a man’s finger and immediately needed to know who made it.

After many questions, he finally got the name of Shiva Shankar in Nepal and knew he had to find this person. While passing through India he arrived at the same market in Goa where he heard ‘the voice’ the first time. Another man’s ring caught his attention and it was in fact made by this illusive Shiva Shankar. The man brought Pitango to meet him and they have been working together ever since.

While he mostly makes rings, Pitango is an artist in many ways. He also makes pendants, patches, even t-shirts once in awhile. He is also a musician.

“I feel like I didn’t really choose to make rings. I feel like rings chose me and I don’t really feel like I have a choice. Until I hear the same voice that talked to me 26 years ago say, “you should stop doing that,” he says with a laugh. 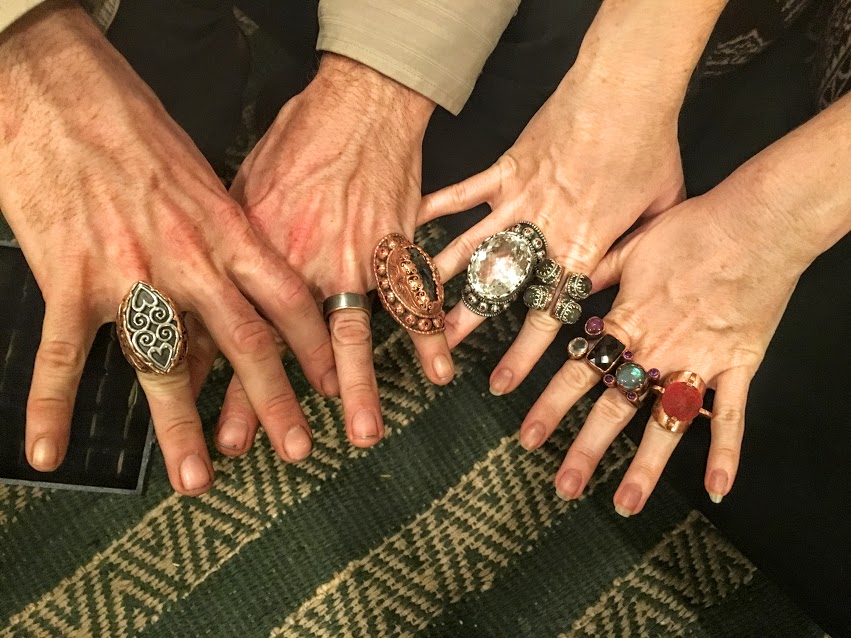 The mystical and healing properties of his rings are without question. One can feel their pulsating energy the second you are in their vicinity. But Pitango jokes about their powers, at first saying they are “just rumors.”

About halfway into our interview, another beautiful woman walks in the door. She is here to see which ring is right for her.

Struck with complete awe of the sheer beauty before her, she slowly starts to select rings to try on. If they don’t fit, unfortunately that one is done. Pitango does not size rings. If it does fit, it goes into the ever-growing pile of “maybes.” From there, you can ask him the story of each ring and see what resonates the most.

“It’s like buried treasure…what is the property of this stone?” she asks, pointing to an amethyst.

“Oh, I don’t have the answer. For me, in my world, I never read a book about stones. When someone is doing what they should do in life, they receive VIP access to information. I just need to trust the information that I receive. And the beauty of that for me is that this information is expanding all the time. Whatever I may think of rainbow moonstone 25 years ago will not be the same as what I think right now. I never limit information. I never say, “that’s the truth,” because I know that those are ancient beings and I just have access to what I am able to access. But there is so much that I am not able to access. So, my growth is totally connected to the information that I receive,” said Pitango with a nearly stern assuredness.

The best way to understand the properties of the rings is to explore a specific design as a whole. 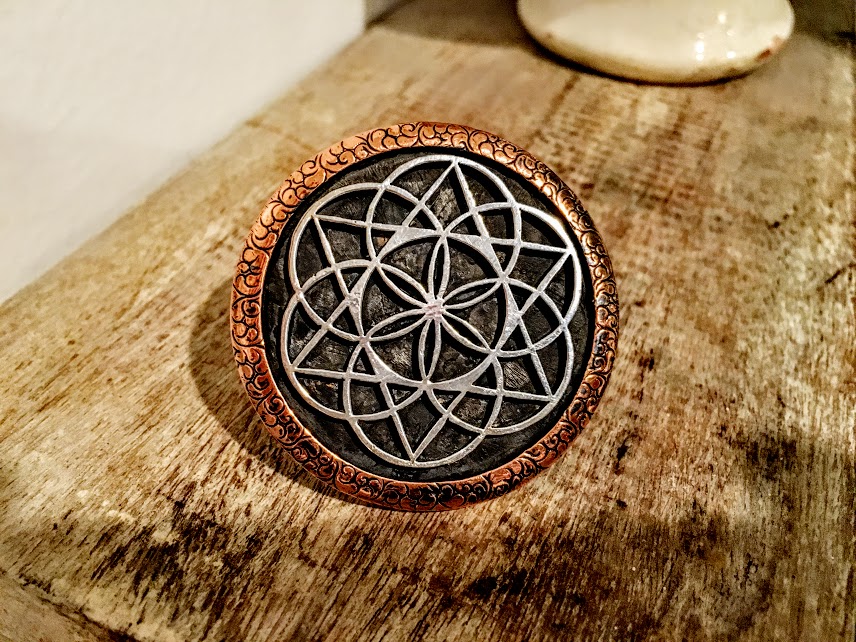 “That is the seed of life. That is a good example.  It’s like a legend. It’s like the bible. It’s coming up now even though it was always here. It’s only coming up now, because we were ready to get that download. It was printed with laser on the pyramids 5,000 years ago. The reason why I put the seed of life on a ring is because I believe that when people are connected to that symbol, they remember that what they are doing in the present time is putting seeds. If people realize that they are constantly putting seeds for what they are becoming then their present becomes way greater. Like right now, I am putting incredible seeds for the future. I don’t know the future  but I can promise you that because I don’t know shit that I trust my feelings. If every moment, I remember the most important moment in my life, then I will put the most amazing seeds all the time. And the seed of life, for me, is all about that. It is the wisdom of the moment. If I fully engage with the present moments in my life, then I definitely will be the greatest me,” said Pitango. 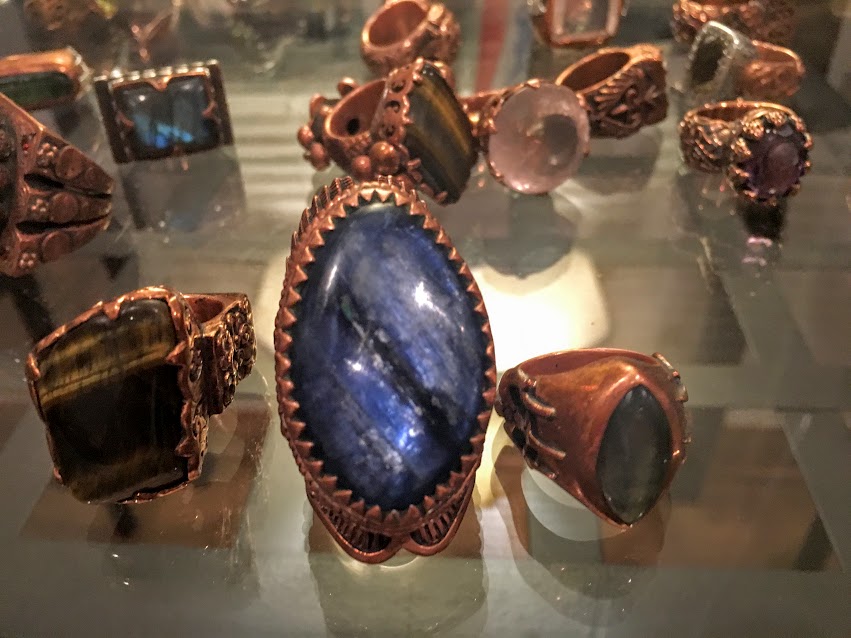 Kyanite Ring (in the center)

“This ring is for a person whose freedom is her inspiration. Inspiration is your life force. The moment you are not inspired, you are not in your momentum.  The person that has this ring needs to remember that he or she is is in charge of her inspiration because what is inspiring is life. So you are in charge of what kind of life you have so you will always be inspired. You are not just waiting around, you gotta go out there,” explains Pitango as the woman gazes in wonder

So what is Pitango inspired by?

“I am inspired by people, generally. When each person finds the David Bowie inside of them. What inspires me the most is to make everybody have the access to be Queens and Kings. I am not following any other fashion. I don’t give a shit about fashion and you can write that. I don’t believe in fashion because fashion really sucks. Even festival fashion. I hate festival clothes,” he scoffs.

As he elaborates, we get to the root of his condemnation. 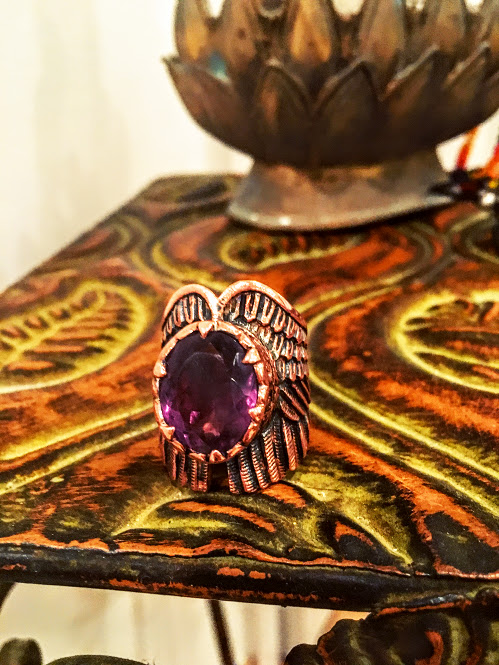 “I feel like festival fashion is really stuck. Everyone has been doing the same thing for years. That is so uninspiring.  I see someone doing something really beautiful and the next year I see everyone else doing it. The reason I am speaking about it is because I don’t think there are enough people who talk about it. We hurt each other by not speaking about it,” he says.

The prominent use of copper in his designs are one of the many qualities that make them truly unique. Why copper?

“A diamond dealer once told me that in India, when a man really wants to go on a spiritual path, he cannot wear silver or gold. Why? He said when you wear silver or gold, you are still attune to your ego and you can lie to yourself. When you wear copper, you gotta be true to yourself. When he said that, there was an energy that I felt like it was true. And since then I start to use copper and its made a huge change in my life and other people’s lives,” says Pitango.

After much deliberation and hours after arriving, the woman cannot make up her mind and decides to purchase both rings. The one on the right is has three stones: rutilated quartz, amethyst and rose quartz. 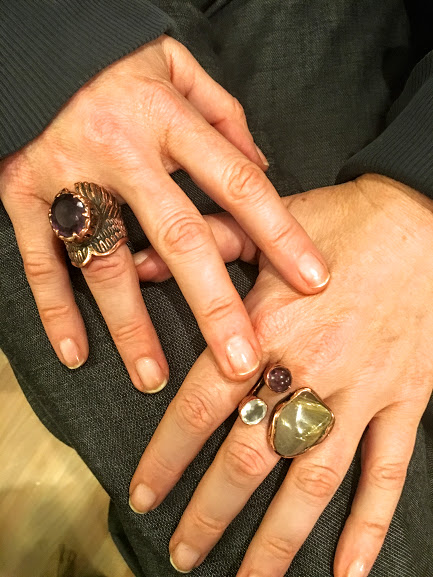 “This is a few things. One is that when you are fully taking the fruits of life you really realize….I don’t know why I am telling you that. Someone today earlier, told me today that her son’s name is Yonathan. Yonathan in Hebrew is the “gift of God” and I told her that it is not true like Jonathan or John. The true meaning is “what god gives”. The difference between “what god gives” and “the gift of god” is that it is like our life. People think that their life has been given as a gift. But it is not true because you come here and then you are gone. God gives us life but it is temporary and we have to remember that so we can celebrate that and really get the best out of it. If you realize that you can take the best out of every situation, then you make a difference in your life but you really make a difference in other people’s lives as well. Be conscious that you can make a decision to take the nectar or not,” says Pitango.

“So, it’s like seeing the glass half full?” asks the woman.

“You choose to be stuck or celebrate and continue. In every given moment there is something to be inspired by. Life is short, so let’s just fucking celebrate it, yo,” says Pitango.

Find these incredible rings at Lucidity Festival or online at Pitangorings.com